Since the dawn of time, and I do mean since Adam & Eve, parents have passed their beliefs down to their children. Faith in particular is meant to be passed down from one generation to the next, first and primarily through the parents. It makes sense really. If parents live by a certain moral code and belief system and they believe that way of life best, they would naturally want to show their children that same path. 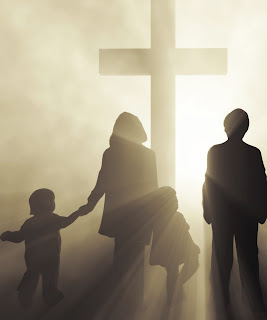 But faith is a personal thing. It is a mysterious gift,
given to some and not others, given in different measures, at different times. Moreover faith is interpreted very individually, but perhaps more because of our personal flaws and sins than for any reason of uniqueness. After all, God is the same yesterday, today and always.
Truth is Truth and does not change.
I was raised in a wholesome Roman Catholic Household, Irish, not that it matters. Although many readers will aha when they hear I was one of eight kids, and I am now mother to eight kids. Irish Catholics have that big-family reputation after all , but in mine it is was and is a sign of our cooperation in God's procreation. Anyway, when us kids hit that teenage rebellion stage and general adolescent laziness made us more interested in catching z's than going to church on Sunday, we heard the old, "As long as you live in this house, you live by our rules," speech. It made sense on many levels. It showed us what was important to our parents and how highly they valued God and the worship due Him. It also protected us from being God-less heathens just that much longer. I always thought we would have the same deal in our house with our kids, and we do, we did, for the most part, except for SSA.
Shortly after we learned of our son's SSA, he announced he would no longer go to church with us. He said the church was anti-gay and therefore anti-him. I was devastated anew. Already worried about his salvation and the influence of the world, it seemed extremely important that he continue to go to church at least once a week, there to be surrounded by God's word and grace, to hear truth, and just by virtue of being in church, want to communicate with God. Our son told us just minutes before we were to leave, and when he would not comply with my order to get in the car, I felt powerless and panicked. I yelled the old standby.."As long as you live.." and when he still refused, I told him he would lose privileges. I snatched his Ipod from him and grounded him storming from the house. At Church, I cried and cried struggling to control tears that ran and ran down my face. After Mass our pastor asked what was wrong, he probably thought someone had died. We shared, and he told us it would not be right in this case to force him. This was no teenage rebellion - because of his SSA, our son had rejected God and the Church, and we would have to respect his free will, pray for him and wait for God's saving hand.
After Mass we returned his Ipod, un-grounded him and explained our decision. Sometimes it still stings, and I second-guess the wisdom, but only sometimes, wistfully wishing he could have hung on a little longer, he could have read and researched with us the truth of his condition, the true meaning of his attraction to the same sex. Most of all that he could have held onto faith - through the thick storm of SSA - that he could have tried harder to understand the church, her position and that he could have searched for God's plan.
But whether or not he knows it, God has a big fat plan for our son - a big fat plan for me too. I just have to pray, to wait and to HOPE.

Keep all of us SSA Families in your prayers!
Email Post
Labels: Faith Parents Prayer